As you might recall from a previous blog, CTA are the proud sponsors of F3 racing driver Chris Davison and follow his progress keenly.  With this in mind, we thought it might be nice to pass on an update from his latest event, the Donington Park Monoposto Championship held on the 18th and 19 September 2021.

This event is part of the F3 Monoposto Championship which is a series of nationwide races held throughout the year and has been running since 1977. The circuit in Donington is 2.49 miles long and the current F3 lap record is 01:29:170 held by Robbie Watts / Dallara F302 in 2015.

What is the format of the day

What were the issues?

One of the biggest issues for our driver Chris was the weather.  As any fan of motor sport will know, the climate forms one of the greatest tactical challenges of any event – with the racing team having to decide on which set of tyres to install on Chris’s 2 litre Dallara 301. On this particular day, the conditions were hugely changeable, with rain falling, rain drying, and the imminence of rain forecasted, which all meant that Chris had the toss up of ‘slicks’ or ‘wet’ tyres.  He chose perfectly! 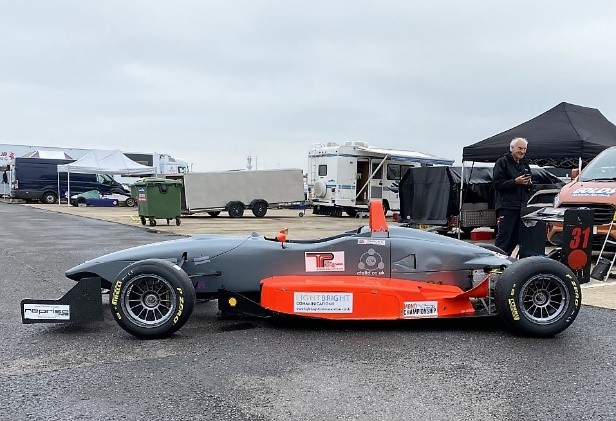 How did the event go?

Chris did well in qualifying with a lap time of 1:33:483 and started the first race next to pole, finishing in second place overall, but first for his category.  Race two started with Chris in third spot on the grid, but he raced a blinder and finished first completing nine laps in a total time of 16:17:670 – over a second ahead of his closest rival! Race three also saw Chris victorious. Chris consistently won fastest lap and emerged as the leader after all three of the races!

After the event driver Chris told us “I’ve known Mark since school and am really grateful that CTA sponsor me in my racing.  Having him here at the event was an added bonus, and I’m delighted to have performed so well!”

Comments from Mark Plimmer CTA’s Managing Director were “It was a really exciting event, made all the more interesting by the weather! I knew that the right choice of tyre was going to be crucial, and indeed it was! Chris made the right decision in those tough moments, and it paid off!”

We are happy to help companies or individuals with their adhesive and bonding requirements. Our experience in different sectors such as automotive, construction, aerospace, transportation, industrial, marine and more make Central Tapes and Adhesives a very good decision all round!