How about this for a diverse application for CTA’s metal bonding adhesives?

James Leadley describes himself as an ‘eccentric’ former coach builder and sprayer. He states that being deprived of Lego as a child has led to his lifelong passion for working with his hands, on what he describes as “enormous lego”! He now spends 12 hours a day, 6 days a week in his workshop, designing, building, and restoring vehicles, mainly classic cars and mini coaches. Some he creates from scratch, whilst others he completely restores.

One such project was a 1920’s mini coach that he took from design to roadside – even making the wheels himself. Also, he cleverly crafted an Edwardian 1910 style tourer using an old Ford Transit milk float.

The point is, James loves to use ‘old school skills’ with a little modern technology to give these beautiful vehicles a second chance to delight and thrill both the public and collectors alike. One day he heard that it was possible to use adhesive as opposed to aluminium welding, for bonding aluminium panels. James began trawling the internet. Some products he found offered overnight curing times… “I might as well weld it” James thought as others he found ‘failed’ in their application too. Then he found Central Tapes & Adhesives’ website and his search on there took him to the Two Part Structural Adhesive 2105 product. “If it does what it promises, it could be perfect” thought James. He then rang CTA and found them to be technical, helpful and informative, so he placed his order. The adhesive was sent to him by courier, and almost immediately CTA 2105 was put through its paces on his current project, a beautiful Vortex GTR. 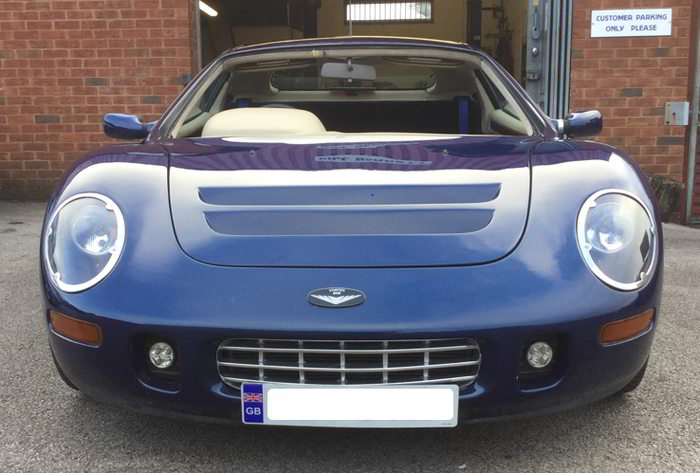 This particular Vortex GTR was created by an ex-Jaguar designer and originally built in 2004. James has been re-designing it for 12 years. One of the final touches, before returning the car to the road, was a rear aluminium spoiler. This is made in four pieces, and he decided to bond the studs and sections together using CTA’s 2105. James said

“This would have been very difficult to weld as it would be likely to distort. As the panel is enclosed, straightening it after welding would be impossible – you can’t ‘hammer and dolly’ it like in years gone by – so 2105 was the perfect solution. The working time was ideal and within half an hour the bits were all totally solid. Amazing speed. I have tried others, but this was so much better. When cured, this was easy to sand too, making it ideal for refinishing. In my line of work everything must be correct and appear traditional, but this modern deviation was incredible and saved lots of time and effort. I’m delighted with the results – I wish I’d found it years ago!”

Whilst James’ passion is for using traditional methods, this ‘deviation’ worked brilliantly without compromising the final product. He is convinced it is just as effective, if not more so.

“This is a fantastic product. In fact, it’s so versatile that I took it to Thailand to use it to restore some silk-spinning machines that were hundreds of years old. It was perfect! My next project is a 1929 Bentley, and I have absolutely no doubt that CTA will be involved!”

CTA describe themselves as “Technical Bonding Experts” and relish the opportunity to solve all your application issues. They will leave no challenge unsolved!

Call or email today to discover just how versatile CTA’s tapes and adhesives really are.